Innovation and service – that is us!

For the first time, world leading tire manufacturer Pirelli presented it’s „Best supplier Award“ to the global tire branch. The Suppliers’ Awards ceremony was held at the Pirelli Foundation in Milan, Italy, on Wednesday (11 April), where Marco Tronchetti Provera, President of Pirelli announced the eight winners to the press and the audience. HF TireTech Group, represented by Günter Simon, managing director and Norbert Behrendt, director curing presses, from Hamburg, Germany won in the categories “innovation” and “service”. “We feel very honored, as HF Group is the only mechanical engineering company who received this award ever”, says Simon. 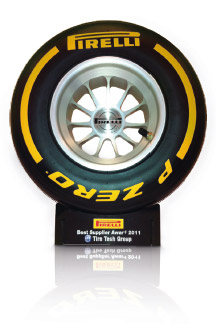 In 2009, HF TireTech Group has very successfully developed highly efficient customized curing presses together with engineers from Pirelli, which satisfi ed all requirements optimally. The recent Best Supplier Award 2012 can be seen as a confirmation of HF’s high spirit, when it comes to innovation and service. Simon: “By awarding us, Pirelli acknowledged that we have succeeded in responding to the multifarious demands of a global leading tire manufacturer in the top segment. We support Pirellis activities to adjust tire manufacturing even more fl exible to specific customer requirements and to expand their position as market leader in high-performance tires.

It shows once more, that HFs’ efforts to improve customer relationships by offering the maximum fl exibility in meeting customers‘ individual needs as well as the constant investment in innovation are successful. „By giving this award to us, Pirelli underlines our leading position in the market, not only as supplier for machines, but also as a source of ideas and partner, who implemented
shared ideas in innovative products, services or processes. I am proud of my team“, says Simon.

The Best Supplier Award will from now on be presented annually. The Awards committee evaluated the suppliers based on the following criteria: quality, innovation, speed, price, sustainability, logistic network and service level. Marco Tronchetti Provera: “Our premium strategy consists of being able to rely on equally premium outside sources. The award goes to our suppliers who had
distinguished themselves during the year.” HF – a worthy and valuable partner in the premium segment of Pirelli.